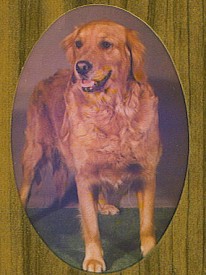 Am-Can CDX   April 16, 1972-Sept 6, 1985   When Chino was about 9 months old, we started looking for a companion for him.  You know how it is...you can't have just one golden!    We really didn't want another puppy, so when we found two 8 month old sister puppies for sale, we went to look.  They were wild!  We chose the quietest one.  When we went to put her in the car, she laid flat on the floor board in the back seat and didn't move for the 30 minute drive home.  She was always kind of timid.    She was gun shy, so hunting was out of the question.  But she became my obedience dog.  She would do anything you asked, if it meant she could be close to you.  She didn't do too bad either.  We made it to the Gaines Classic in 1985.  She once almost took High In Trial, but lost at the last minute to a Novice dog with a 198...a Pekenese!!!   She and Chino became inseparable.  They went everywhere I went.  People used to ask us how we could tell them apart.  Of course, they didn't really look anything alike. 🙂  They asked if they were brother and sister.  "Nope, they're husband and wife" we used to tell them!   They even had one litter together of nine puppies.   Dixie was my healthiest golden.  She never got sick.  But she did love to steal the garbage!  She once jumped up on the countertop and stole some sandwiches I had made for my brother, who was coming to visit.  Imagine our surprise when I yelled down there were sandwiches on the cupboard for him and they were gone😮  When we had Dixie trained in utility, we started showing her and she seemed to be having trouble with the bar jump (back when they were 32").  I took her in and had her re-xrayed and found she was dysplastic.  This after passing her xrays when she was one.  We retired from obedience and never did get the UD.  But she was trained through it and should have had it.  Oh well.  She lived to be 13.5 years old and then developed some liver trouble.    We helped her to Rainbow Bridge Sept 6, 1985 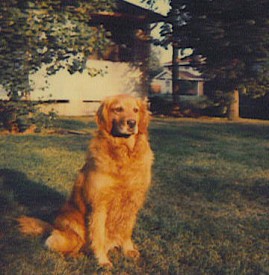 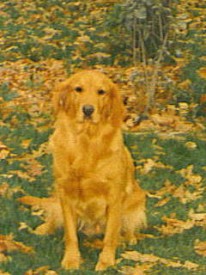 Dixie and the fall leaves 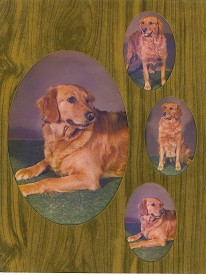 A collection of pictures 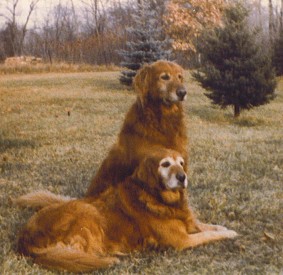 My favorite picture of the "husband and wife" team