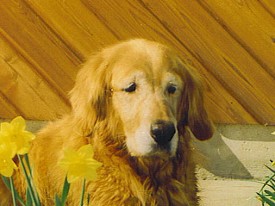 Amberac's Notorious Nikki                              Am/Can CDX                                          12/29/83 - 5/6/95   Nikki was our third golden, who we got after we lost Chino.  He died on Saturday and the GRNews arrived on Monday.  There was a litter listing from Amberac's kennel that caught my eye.   I called Ellen and she had a girl in the litter not promised yet.  It was fate.  She arrived by airplane ten days later when she was seven weeks old and when we pulled up to the hanger, we could hear her howling, wanting to be out of that crate! We still have that crate.  Nikki was my next obedience dog and she helped make more friends for me.  We traveled all over for her CD and CDX.  We also dabbled in breed.  She took a Group 1st in her first Puppy Match, I was so thrilled. I also remember once showing at the Fort Detroit GRC in Am Bred when she was about 18mo old.  We placed 3rd out of five dogs.  We were pretty happy...had our picture taken even.  When we were watching the rest of the classes, I remember Barbara Dismukes, a long time Golden breeder tapping me on the shoulder and giving me a little advice to move a little faster when I gaited my dog.  I was thrilled she had noticed me.      But Nikki loved obedience and we would both rather that.  We finished her CDX in both countries and then I went back to school to become a nurse, so her Utility showing was put off for three years.  By the time I was finished, she was too old to restart, so we just enjoyed being together and having fun at home, showing in veterans obedience once in awhile.  When she was 10 1/2, she started vomiting.  After much convincing the vet she had something wrong with her bowel, she had surgery.  The vet said it was just a fibrous ring in her intestine, causing a small blockage, didn't think it was much and did I want to send it in for pathology report.  Imagine my surprise, and hers, when she called me 10 days later to let me know it came back Adenocarcinoma.  No effective treatment and she gave Nikki 3-9 months to live.  She lived 10 great months, before it returned.  We helped her to the bridge May 6, 1995.  It doesn't get any easier.    But we had a new puppy called Piper and that helped ease the pain. 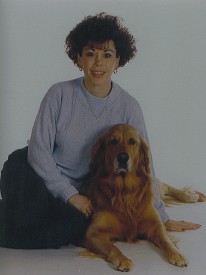 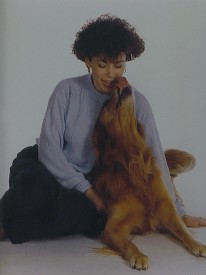 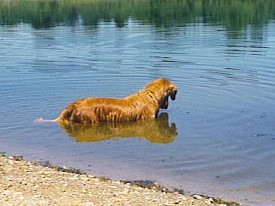 Her favorite sport...fishing for bluegills

Posing for her picture in the daffodils